Rufus Peters has never felt exceptional in any way. How could he, with a twin sister who outshines him at everything they do? His two problems are finding a way to wiggle out of a student exchange to Quebec, and liberating Boreas, his skateboard, from the principal?s contraband cupboard. After Amelia knocks on their door, life in the Peters family goes from plain old “Just Cheese Please” to Nick’s Pizza’s “Grand Slam and More.” Roof makes it his mission to solve The Mystery of the Mexican Stranger.

In 1959 Ray and Daisy Cook and their five children were brutally slain in their modest home in the central Alberta town of Stettler. Robert Raymond Cook, Ray Cook’s son from his first marriage, was convicted of the crime, and had the infamy of becoming the last man hanged in Alberta.

Forty-six years later, a troublesome character named Louise in a story that Betty Jane Hegerat finds herself inexplicably reluctant to write, becomes entangled in the childhood memory of hearing about that gruesome mass murder. Through four years of obsessively tracking the demise of the Cook family, and dancing around the fate of the fictional family, the problem that will not go away is how to bring the story to the page. A work of nonfiction about the Cooks and their infamous son, or a novel about Louise and her problem stepson? Both stories keep coming back to the boy.

Part memoir, part investigation, part novella, part writer’s journal, The Boy, is the author’s final capitulation to telling the story with all of the troublesome questions unanswered.

Among the things I like best about this book is its steady, sure-handed tone and style. Hegerat’s unconventional approach to its subject – what turns a boy into a killer, applied obliquely to the case of the last man hanged in Alberta, Robert Raymond Cook – yields truths that otherwise could be only guessed at. We’ll never know any answers for sure, but Hegerat’s meditation gives us a different, useful, and wise angle.
— Sharon Butala, author of The Girl in Saskatoon

Lynn Howard has just begun to appreciate the freedom of the empty nest when Heather, her acerbic, self-centered twenty-year-old daughter an­nounces that she is pregnant. Heather decides that adoption is the practi­cal solution. After the baby is born, Heather, stunned and furious to find her heart at war with her head, declares that she needs more time and she and her baby come home to stay with Lynn. Three weeks later, Heather sud­denly insists that Lynn deliver the baby to her adoptive parents before that resolve weakens again.

And this is where the novel begins. Lynn can no more make that delivery than she could give away her own first child, so she stows Beegee in a laundry basket, straps her into the back of the car and drives west out of Calgary.

Alternating between Lynn’s story and Heather’s, the novel explores the burden of too many choices, the indescribable emotional maelstrom of birth and motherhood, and the tangled threads that tie a child to a family.

A “domestic” novel in the tradition of Carol Shields, Delivery is a story with a large theme painted on a small canvas. Betty Jane Hegerat delivers an elegantly written mother-daughter story most mothers and daughters will adore – and plenty of dads and sons too. – Dave Margoshes

The characters in A Crack in the Wall share a strong sense of home, whether it is a lifelong sanctuary, or a shell as fragile as the person who inhabits it. A young kleptomaniac ventures outside the shaky walls of her self-imposed confinement. A middle-aged woman pragmatically disposes of a houseful of pets in Calgary before returning to the Maritimes to embark on the next phase of her life. An elderly woman is forced to share her room in a nursing home with an old enemy. The stories explore the vastly different ways in which people deal with blows to the foundations of their lives, with loss. In the title story, “A Crack in the Wall,” a perfect home fractures after the death of a child. And in another, a grieving husband finds the house haunted by ghostly messages attached to the frozen meals left behind by his dying wife. These are ordinary people, abundantly flawed, often recognizing, but still clinging to their weaknesses.

A Crack in the Wall takes the reader on a voyeuristic walk down suburban streets, a glimpse into open windows at people yearning for what was, and making their reluctant peace with what is, and what will be.

“Betty Jane Hegerat is a gifted and compelling storyteller. She deals in ordinary people who lead ordinary lives, but by some unobtrusive narrative magic, her people become extraordinary.”
–David Carpenter.

Refreshingly unpretentious, A Crack in the Wall draws out detail with an easy momentum that avoids the excesses of myopic realism…  Simple and precise, Hegerat’s style elegantly explores the inner lives of characters struggling against expectation and inevitability – themes that are once maddeningly complex and mundane … Hegerat herself is a long-time Calgarian and her penchant for recognizable landmarks reverberates as strongly as her characters’ attachments to the comfort of their own, often disintegrating houses … Hegerat’s stories’ clear voices and familiar obsessions make them at once artful and sympathetic.

Transferred between foster homes for most of his life, twelve-year-old Corey Brinkman has developed a bad habit of running away. His new foster parents, Wilma and Ben Howard, are determined to make their home his for life, but old habits are hard to break.

Wilma takes Corey to the Calgary Zoo for his annual visit with his birth mother, despite her discomfort about Tina Brinkman and the fever Corey is pretending not to have. When Corey goes missing at the zoo, his two mothers are forced into an uneasy truce in the search for their son.

Running Toward Home reveals the complex relationships surrounding a foster child, and the fine line between protection and standing in the way of life lessons. For twenty-four hours the Calgary Zoo becomes the entire world, and the lines between the nurturing instincts in animals and humans become blurred.

“Three deceptively simple strands-a mother, a foster mother and a runaway boy-are woven together against a slightly surreal backdrop of the Calgary Zoo at night, when tigers and dinosaurs roam free. Once joined, those strands form an emotional knot not unlike that at the heart, or in the stomach, of every family, from time to time, as its members run from and toward each other. Betty Jane Hegerat has written a small gem of a novel.”
– Dave Margoshes
Running Toward Home by Betty Jane Hegerat (ebook 2017) 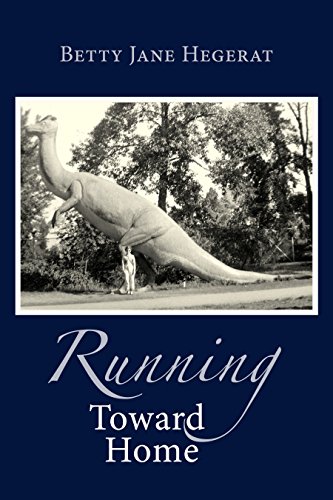 Twelve year old Corey Brinkman is, as his great grandfather knows for sure in his heart, En goede jongen, such a good boy. In fact, everyone else with a place in Corey’s life would describe him so. How, then, does a good boy end up at the Calgary Zoo, feeling utterly alone as he darts here and there during the night?
Corey Brinkman is also a runner. The file on the social worker’s desk is thick with events that eventually brought Corey to the zoo. It’s a long narrative of dysfunction set into motion long before his birth. There’s one person Corey will, without hesitation, always blame for his chaotic life, one person he hates. But Corey is also not easy on himself, and blames his feet for his current troubles.
Without knowing that people who care about him are circling around the zoo, hoping to find him safe, Corey waits. Tigers, monkeys, peacocks, and the great stony-faced dinosaurs are his only company.
eBook Available to purchase:
Amazon (Kindle) Worldwide
Kobo
Libraries may purchase through Overdrive
Loading Comments...